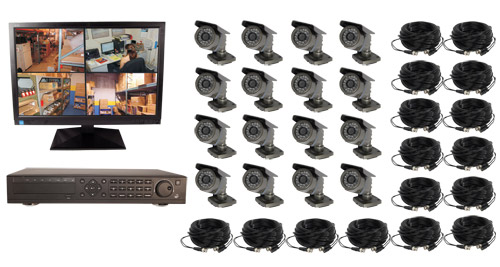 Does Not come with Monitor

This complete home surveillance system will allow you to install up to 16 wired cameras all throughout your home or place of business, to digitally record all of the activity that is happening. This DVR has full networking capability and uses an embedded Digital Video Recorder, which allows you to view live video on the Internet or play back recorded video.

This unique mega video recording system is perfect for when you need to keep an eye on lots of different locations. It would also be ideal for a doctor's office, dentist office, or any place of business that has several rooms, and workstations. This amazing system brings home surveillance into the 21st century because it also works with smart phones including: iPhone, Blackberry, and Android. So, no matter where you might be, you can see what is going on at the office, or at home!

This complete home or office surveillance system includes the following plus a mouse and remote:

Does Not come with Monitor LCD 19

We always have a 2 Year Warranty on Complete Systems


A Doctor, had one of these installed in his office, and it was so easy to install, that his nephew (a high school student) was able to do it. The good doctor was able to see that a certain patient, while waiting in the examination room, would stuff her purse with bandages, cotton balls, and cotton swabs... perhaps not a huge transgression, but the staff, by having this knowledge, would later start bringing that patient to one of the examination rooms that did not have any such supplies.

He was also able to witness that a male courier would sometimes make silly, yet sometimes offensive jokes, to one of the female staff, and was able to put an end to that situation, by politely and diplomatically asking the young man to refrain from such humor.

So, there are many more benefits to a video surveillance system, than just having it in case of a crime or serious problem.