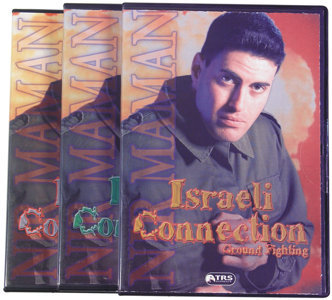 
So harsh and effective, this never-before-revealed system has battle-hardened U.S. Spec Op soldiers shaking their heads in respect and awe... so new and exciting, this "first peek" at "hidden" Israeli combat secrets is sending shockwaves through the martial arts world! You know what the difference is between a so-so fighting system (which can give you false confidence)... and one that guarantees you will have the skills to obliterate anyone who gets in your face?

Well... this guy, for several years straight, saw combat-ready action EVERY DAY. Yes, he faced lethal combat with the enemy. Yes, he killed people. And yes, he had to use his skills every second of every hour he was under threat.

His name is Nir Maman (pronounced "Near"). He's a former Israeli special forces commando and top hand-to-hand combat instructor. From 1995 to 1998 his long-range reconnaisance unit (the feared "Sayeret Golani") roamed deep into enemy territory, fighting, capturing, and "eliminating" terrorists and insurgents. Usually, there were only 4 men in his unit. Alone, without back-up, miles from safety -- and with less than one-fourth the training our own Spec Op soldiers receive -- these men faced constant, unrelenting and vicious counter-guerilla combat.

Did you catch that? These men did not have the luxury of long training. Israel has a limited population, and the men who join the Special Forces must get up to speed FASTER than any other soldier in the world.

They Face Blood-Curdling Lethal Combat
Almost Immediately ... Every Day Of Their Service! Our own super-nasty Spec Op guys (SEALS, Delta) -- as well as other world-class soldiers like the French Foreign Legion -- are in awe of these Israeli soldiers. Their training is so short and so CONDENSED that at age 20, the Israeli Spec Op soldier is as skilled as the average 30-year-old SEAL.

The secret: Astonishing short-cut training methods that -- until now -- were the most hidden fighting secrets in the world.

These guys HAD to learn fast... because they had to USE their training within days (sometimes hours) of learning it!

What's this mean for you? Plenty... if you're hungry for proven, super-nasty fighting skills that you can learn almost overnight. Nir not only used his skills in the field... but he got so good that he was asked to TEACH other soldiers his advanced skills. (A huge honor only a handful of men have ever enjoyed.)

He's not just good (and has proven it by coming out of years of lethal combat without a scratch). He's an expert ... who has perfected a short-cut teaching method that will force-feed these skills into you faster than you ever believed possible.

Nope. The Israeli army had to learn quick how to take ordinary men (who have no special skills or advantages whatsoever)... and turn them literally overnight into super-skilled fighters who could face lethal combat with absolute confidence and mega-dangerous moves that would prevail over the enemy.

Pray that you never have to meet up with the kind of guerilla terrorists the Israelis face every day. Vicious zealots who do not care if they live or die, as long as they inflict damage on you. Wild-eyed and well-trained killers who, in fact, WANT to die as they take you out. (They think they're martyrs, with a twisted version of Heaven waiting.)

Let me tell you -- when your opponent doesn't care at all about his own life as he attacks you... you better have the skills to take him out FAST. In a split second, before he can put any hurt on you. And... you better make sure he STAYS down.

Here's what's up: These fighting secrets have NEVER been revealed before to anyone outside the Israeli Special Forces compounds. Nir has agreed to share them because, first, he created this special system himself. It's mostly his. (The Israeli army begged him to stay and continue teaching, but he had other plans after his long and distinguished service.) And second... Nir (along with so many other front-line veterans) realizes it is past time for Americans to learn how to fight.

In just over an hour, you are about to "quick-learn" vicious fighting skills that will change your life. Remember -- our own U.S. Spec Op guys are deeply impressed with these Israeli tactics (and that says a lot about the authenticity and quality of this amazing new system). Even the most battle-experienced Delta commando in our army hasn't faced a fraction of the action the average Israeli soldier does in a month.

These skills are being proven, over and over again, every hour of every day. They are the reason Israeli soldiers are...

The Most Feared And Respected In The World! Would you like to check out these fighting secrets yourself?

How can world-class fighting be simple? The answer... is in Nir's astonishing teaching method. It's completely new to martial arts.

Most systems get complicated fast. It takes years to get just decent at the groundfighting skills needed for your average fighting system... and then more years to master the trapping skills, the disarming skills, etc. And none of the training you learn in face-to-face fighting works on the ground, and vice versa.

Nir has magically made all other martial arts training obsolete. How? By bringing ALL the skills you will ever need down to just 7 BASIC TOOLS . And these tactics work whether you're on the ground... running through a dark alley... or surprised from behind with a knife or gun.

Think about that: One set of skills... which you can use in EVERY SINGLE situation you find yourself in. It's like having one tool in your toolbox that does everything. It seems hard to imagine... but it's real. It's proven.

But, man oh man, does it ever WORK! Here's a "taste" of what you're about to discover:

It goes on and on. These are the most amazing and effective fighting secrets you'll ever learn. All in a short-cut, super-condensed format that will infuse you with skills literally as you simply WATCH the training tapes.

The thing is... all you have to learn is 7 simple moves ... which work whether you're standing up, running, or on the ground. This training immediately reduces effective self-defense into a (fun) single "force-feed" session that will fly by.

Are you ready for it? No previous experience with fighting is necessary. You don't need to be a "natural" warrior . Nir will take care of all of that.

In a single training session!
Add to Cart
Powered by