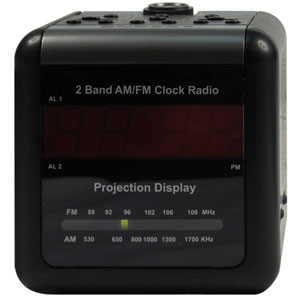 This nice-looking, Fully Functional Alarm Clock with Time Projection Display & Built-In Hidden DVR Camera is still a great sounding radio. No one will ever be able to detect this hidden surveillance camera disguised to look like a regular and fully functional clock radio.

The Hidden Camera Clock Radio & DVR features motion activated recording, which begins recording when any motion is detected. This is a great feature, and with motion-activation you will never have to sit and fast forward through hours of useless footage, waiting and looking for the action that was captured.

You can also watch the video and audio, that was recorded by this beauty, on any PC or Monitor, by easily connecting this to your TV using an RCA cable or you can simply remove the "SD card" and play it on your PC. What could be easier or more convenient? And... because it has it's own built-in DVR, you can place it anywhere, and it is ready to record the "action" as it happens!

Think of the possibilities. These days, it's good to have at least one hidden camera in the house, if not a complete system, and we offer those as well.